For my particular vehicle, I initially looked at very aerodynamic and versatile spaceships to mimic Bruce Banner’s agility and awareness.  During an impending threat, Bruce Banner has the ability to transform into the Hulk, so I also looked into larger and bulkier spaceships for inspiration as well.  After many iterations, I largely based my final vehicle off the VFA Jolly-Rogers jet to show the maneuverability and smartness of Bruce Banner.  I then utilized many of the Hulk’s powerful and unyielding character traits to morph the jet into an ideal form that resembled a ship protecting itself at all costs from impending doom.  Another vehicle I looked to for inspiration which largely helped shape the environment was the evacuated tube transport system.  In this system, passengers are sent at extremely high speeds through a vacuum tunnel to bypass major roadways.  In this same sense, I based my vehicle in space just leaving an enclosed worm tunnel.  The piece is set in a futuristic time when scientists have fully discovered worm tunnel capabilities, and humans are able to travel through them at warped speeds bypassing parts of the universe to reach final planet destinations.  However, in my piece the vehicle is not only operating in the harsh environment of space, but it also has to deal with an impending asteroid collision with the destination planet.  As a result, the vehicle adapts to survive by transforming into a more compact and resilient shape with a force field surrounding the exterior.  When rendering the piece, I kept in mind the Hulk’s origins by making the jet green and purple, as well as making it look as if the piece could be part of a comic book.  In addition, I wanted to make the viewer believe that this scenario and technology could be possible in the future.  As a result, I took a more realistic approach to designing the aircraft and then added features to the vehicle which could resemble futuristic spaceships.  I also wanted to evoke a sense of suspense to the viewer as the vehicle comes zooming out of the worm tunnel to an initially unknown catastrophe.  To accomplish this sense of near destruction, I rendered the piece with a composition that had lines all leading to one point of obliteration.  Ultimately, we see in the final renders that the vehicle adapts and avoids the impending catastrophe. 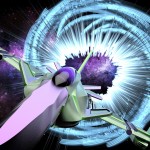 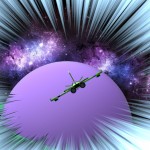 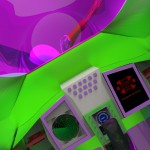 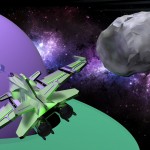 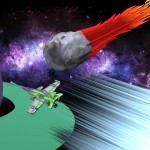 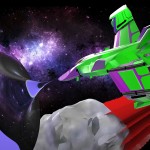 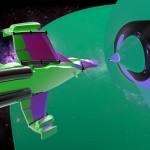 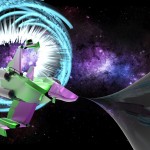 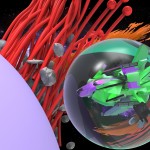 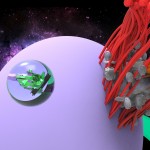 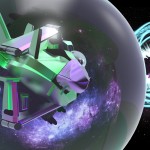